Is this what I need from BuyHear to program OPN?

I called BuyHear and the person I spoke with wasn’t sure what I needed to program my OPN 1. Told me someone would followup with me.

I then got email with this quote. Does this look right? 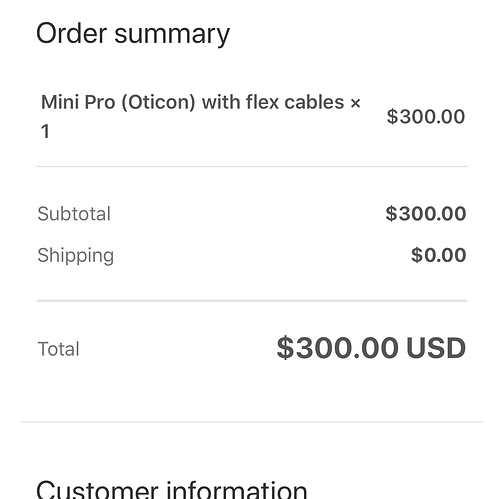 Wow. They’re really going for trying to find what the market will bear. First we heard that a programming kit could be had for $175. Then when some called they got $225 claiming due to not previously being a customer. Several pulled the trigger. Now they’re saying $300. Yikes.
You can get the box from aliexpress and then the cables from thehearingclub for less than that price. Audiometrix claims they’ll beat prices but I’d rather they stated a price.
Volusiano recently got stuff for his OPN’s so maybe he can clarify what you need.

Don’t buy it from BuyHear. Contact AudioMetrix and ask them to honor the $175 price that they had said on this forum that they would match. That would be the best deal you can find so far if they’d sell it to you at $175.

To give everyone some history, BuyHear originally was going to sell an OPN 1 customer of theirs an ExpressLink (which is the wired version programmer by Oticon) for $175. But they instead shipped to this customer the MiniPro plus relevant cables for the same price, citing that the MiniPro is more universal and can be used to program more than just the OPN. So this BuyHear customer was OK with it (and actually more happy to get the more universal MiniPro, I think), and reported this on this forum.

We waited for several weeks for them to procure a new big batch of MiniPro from China, and the delay was due to payment issue between them and the Chinese vendor. But the shipment finally arrived and they finally shipped it out.

I’m guessing that they now get more greedy because they see the spike in interest in buying the MiniPro. Little did they know that the interest is only because they sold it for a good price (at either $175 or $225). But they’ll find out that nobody will buy from them for $300. This will give people a bad taste in the mouth in my opinion and they may even lose more hearing aids business because of this greediness. If you look at the TV Adapter 3.0 (TV streamer for the OPN), BuyHear is selling it for $349. I think this is also a greedy price. If I remember correctly, Audiometrix told me they sell it for $200. So you should contact Audiometrix to see what you can get for the MiniPro kit. For sure it’s not going to be $300.

Getting the Mini-Pro’s from China is kind of a pain; I suspect the high price from BuyHear is more a reflection of disinterest in selling them.

Volusiano: What’s a guy gotta do to get that name?! I could sure save $50US with a refund.

Other than the first one, I hadn’t recalled that other non-customers were getting $175. I only heard $225.

I was PM’ing another forum member and he said he was just quoted $250 for the MiniPro & cables from BuyHear. So it looks like the quotes are all over the map here from BuyHear.

Would that forum member be inclined to talk to Audiometrix and see what they would do? If they could say “here’s our price…we’ll beat someone else’s price though” would be rather helpful. It’s a little discouraging to hear all this inconsistency from Buyhear.

Now that BuyHear is jacking up the price and quoting $250 to $300 to various people, I don’t really know what Audiometrix will do…

Well…$220 isn’t terrible…it’s not $175 but not terrible. This is why I wish Audiometrix would state a price. “Here’s what we want. We would beat any price.”
This fluctuating price stuff is silly. Set a price. If it doesn’t sell then lower the price. Other than inflation it shouldn’t go up.
However if it sells well then how about instead of being greedy (what the market will bear and all that) that the business enjoys the sales and the intangible goodwill. You set your price and now you’re getting it. All good. Right now Buyhear is losing that goodwill though by being greedy.
Maybe chatteremail has their motivations figured.

I think part of the issue is the price they can get from a supplier. Mini Pro prices have been all over the place over the past year, ranging from $159 to $299 and on occasion I’ve seen offers at $399. It wouldn’t surprise me if for somebody buying in quantity if it isn’t a separate negotiation each time they order.

Totally agree @MDB. This entire industry takes advantage of a historically older less savvy population when hearing aids were a more narrow niche. I’m in my 30s and completely frustrated at the inefficiencies that exists ranging from transparent market driven pricing to reviews of hearing aids.

Not sure I communicated well. What I was trying to get across is that the sellers (Buyhear or whoever) is at the mercy of their suppliers. I’m not sure MiniPros have a routine supply chain and suspect a seller has to pretty much hunt around online like we do.

@MDB perhaps. But this all a supply and demand thing. If audiologists bought more quantity and treated this more like a traditional business the right outcomes would happen. More transparent price etc.

bobbydigital16: I agree with reviews. If only detailed feature comparisons along with translating the marketing terminologies/hype used by the different companies.
Obviously a reviewer can’t say how well a particular model would work for a particular person or how good it sounds. Unless there were objective tests that can show features objectively. But everybodys hearing is different.