agree, i dont see why the ‘major’ brands dont have the fishing string thingy curve by default like the eargos. Then you can completely hide the pull string inside your ear lob. ive never touched these phonak and starkey iic ones… can the string be bent or shaped so it doesnt just stick straight out the ear like an antenna?

Hi there, you need to “come out” and stop worrying about “hiding” your hearing loss, most people around you probably know anyway, don’t be shy about trying to do something about it, honestly I don’t think people spend all their time looking at your ears, so a small amount of “fishing line” is hardly going to be noticed by anyone.

Also the Signia Sillk can be used with its app without bluetooth features.

You are right there.

I’ve had red ear moulds for over a year and just got bright pink ones, the person who served us at a restaurant I go to regularly, never noticed my hearing aids BUT noticed by Dad wearing my Phonak Partner Mic, the last time I went. We’ve been going to this restaurant once a week for over a year with the same member of staff serving us.

With all respect, you are not aware of my circumstances. I freely wear a top of the line Signia Insio 7AX custom HAs already, and yes, everyone around me knows of my immediate hearing loss a couple of years ago.

I have a specific application where I need something more discrete from time to time and why should not be in question here on this support community! It’s not about “coming out”.

Thanks Richard. I would love to see a screw in removal tool or similar, like Lyric offers - I think that would be the best of both worlds.

Not sure if you can trial customs, for obvious reasons?

I’ll be trialling customs the week after next (Starkey Evolv 2400 CIC). The audi took ear impressions last week and sent them away for manufacturing. I asked if there was any cost for this and he said no, and I asked what happens in the event the devices are not suitable for me during the 2 week trial period - he said that’s no issue and there still won’t be a cost.

Hi there, sure I get what your saying, no problem there, however it’s obvious regardless of your situation, your more interested in “form factor” them what any one HA can offer over the CIC ITE, so on this forum we try hard to offer solutions that will improve your hearing, not so much on how they look,or how invisible they are to others.

I’m really not trying to be difficult, but the question is really simple. I have narrowed my choices down to between two different branded IICs. Does anyone have experience with either or both, and can offer any insights into their user experience?

I’m not interested in a CIC and never raised that or asked anything about it.

Sorry, I didn’t mean to hijack your thread and switch the discussion to CIC.

How soon are you looking to make a decision? If my trial of the Starkey CIC doesn’t work out (the fishing line antennas will play a big part in that), then I’ll be going to one of the IIC models you asked about - likely the Phonak P90.

No problems - the conversation was loosely related anyway

I’m not in a major hurry - I need to make a choice and book in for impressions ASAP. But the timing is ultimately up to me. I would be interested in your feedback, nonetheless, so please by all means post back here!

Did you have a look at the Silk X as well? I’m no expert so I don’t know if they are suitable for you; however even though they are CIC, they are really small and fit right inside like an IIC. I was really surprised at how small they were.

I had a trial pair and they were very comfortable and they could not be seen at all unless someone was right beside my ear looking in. Discretion is important for me as well so the audi took a photo of my ears and I couldn’t even see them. Unfortunately they didn’t quite work for me as I pretty much couldn’t hear speech at all (although given a bit of time and a few more adjustments I’m sure I would have).

They have the advantage of the Click Sleeve too, which comes in 6 different sizes (I think) and vented/non-vented options, so there’s no waiting for moulds to be made. Perhaps you could add this to the mix as well and talk to your audi about a trial and you could walk out of there same day with a pair.

They weren’t suggested to me, but I did come across them in my own research. The two mentioned were the suggestions for the “most discrete IIC at any price point” and I ran with that.

I had Signia Active Pros previously, and they were great before moving to my current HAs. But after having customs now and no longer constantly playing around with open/closed/sizes of click-tips, I was pleased to no longer need them anymore.

Thanks for the alternate suggestion though.

Hi there, you need to “come out”

I was afraid of this thread turning into this. Why do people always find it suitable to judge and admonish when someone is on this website actively seeking hearing aid advice? Shouldn’t we be happy that someone is not ignoring it and actively trying to hear better rather then tell them trying to be discrete is wrong?

Just because you dont find an IIC suitable/useful doesn’t mean it isn’t the best option for someone else. If that was the case, the manufacturers would stop spending millions designing and producing discrete aids and go for bigger is better.

I’m glad the OP has pointed out that none of us know his situation or reasoning. Similar to my situation, I have P90s and IIC Eargos. I use my IIC units probably 80-90% of the time. They work best for me and I choose them over the P90s for my lifestyle.

Sorry that was the advice, you know don’t be shy or embarrassed about your hearing loss.

Why do people always find it suitable to judge and admonish

This only happens when people talk more about wanting “invisible” discreet HAs because their embarrassed by being seen using HAs, they talk about being “not interested” in what a HA can actually offer in advancing their hearing options, extra features aren’t always a waste of time, one other thing is one was asking about wanting to use an app, but couldn’t because of no wireless with those he wanted, I offered a solution by Signia, the silk X which can use the app without wireless.

They work best for me and I choose them over the P90s for my lifestyle.

Ha, you can make as many excuses you want, there isn’t a lifestyle that one must exclusively use a CIC other then “don’t worry no one will know I’m wearing a HA”

You seem to continue making a lot of assumptions. But again, you do not know my circumstances or why I occasionally need a more discrete solution to my daily HA. Hint, it has nothing to do with being embarrassed - and more to do with other apparatus I must wear from time to time as part of professional employment! An IIC will not interfere in ways that anything larger than something in the ear canal will!

Ha, you can make as many excuses you want, there isn’t a lifestyle that one must exclusively use a CIC other then “don’t worry no one will know I’m wearing a HA”

Yet more assumptions. How do you know absolutely anything about anyone’s lifestyles? I’d prefer you don’t continue contributing in my thread, to be honest.

Ha ha, whatever makes you happy, but this is a public forum, but agree it’s time to move on it’s getting late and a cup of tea… is in order.

For those talking about the Starkey wireless CIC–the antenna can be curved with a little heat and, depending on your ear, tucked into the concha pretty discretely.

For the OP, the phonak and starkey IICs are both good. The titanium is robust and it’s nice to know that if you drop it on something hard it won’t break; it often takes a bit longer to come in because there is only one titanium shell lab and it is international, but then as long as you aren’t having the shell remade repairs are more local. Starkey can usually fit a stronger receiver into a smaller space, but with your loss (and depending on your ear canal) that doesn’t necessarily matter. Starkey’s feedback management is probably a bit better? If you have a nice ear canal for an IIC and can get a good deep impression so as to have a pretty long hearing aid that is still an IIC, feedback may not be much of an issue, but if the hearing aid is going to be pretty short that might be a reason to go with Starkey. If you intend to keep these for a while, check on repair pricing out of warranty as there might be a significant difference. But at the end of the day, differences are probably razor thin; flip a coin.

For those saying that the OP needs to get over their vanity and go with something bigger, depending on the ear that may be a very nice hearing loss for an IIC. Depending on the ear, IICs are comfortable with great retention, wind noise isn’t a problem, natural pinna directionality is maintained. If someone feels that all of their listening difficulties are resolved with an IIC, why SHOULD they get something else? We don’t know what this person’s speech-in-noise abilities are like, they might not need the extra support from directional mics and wireless accessories.

There are absolutely people who demand IICs for whom they are inappropriate, but this person isn’t obviously one of them. 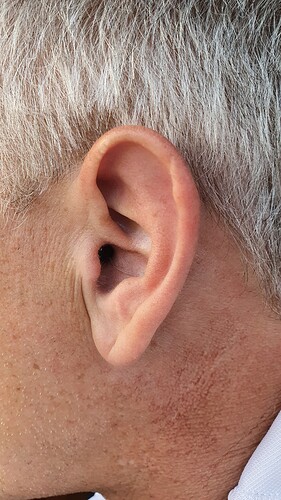 For those saying that the OP needs to get over their vanity and go with something bigger,

depending on the ear

Yeah that’s one of my points.

If someone feels that all of their listening difficulties are resolved with an IIC, why SHOULD they get something else?

Exactly, it’s hard for some to drop that " they won’t know I’m using a HA feeling"

Who cares, that’s not the point of being vain.

they might not need the extra support from directional mics and wireless accessories.

There are absolutely people who demand IICs for whom they are inappropriate, but this person isn’t obviously one of them.

Well if you say so.

With the Starkey and Virto units, if you heat and curl it, can you get it to lay like this?

Only the antenna on the Starkey wireless CIC is longer and more noticable. For the non-wireless versions, the pull strings are already just about like that.