Following on from my previous threads I have at last got around to completing this project and publishing the design. You can find it on Instructables.com at Equalised Headphone Amp for Hearing Impaired.

I have 4 spare bare prototype PCBs if anyone would like to make their own, which I’ll be offering on eBay shortly. Set up a saved search for “Equalised Headphone Amp Bare Board” and you should be notified when it goes live. 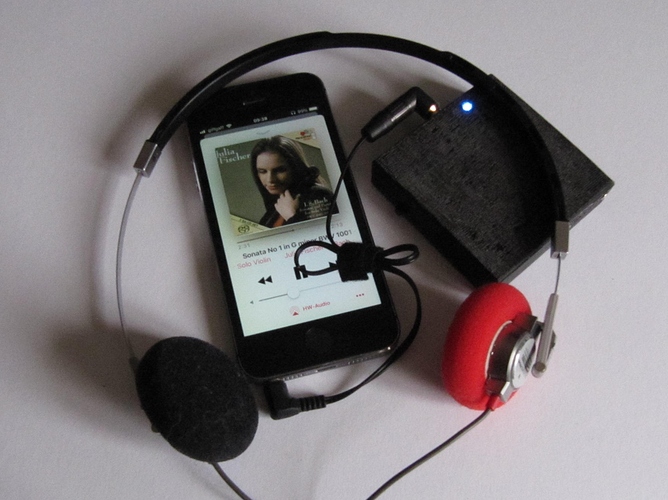 Why are you sprawled-out over three threads? (But thanks for back-links.)

Going back: telecoil has bass-cut because otherwise it would be all 50/60Hz hum.

I see a smartphone and a headset. Going that technology, you could use the EQ built into many smartphones, from iPhone to my $39 Android. Mine is 10 band +/-10dB. I’m sure you realize that headset over hearing aid, the HA blocks the sound somewhat.

This is newer. My very new Marvel will take streaming audio and put it right into my ear. A majority of the correction I want is already programmed in the Marvel. Works pretty good. With open tip much bass leaks. With semi-closed tip the bass is smooth and remarkably deep.

(Rightly or wrongly, I thought that a continuation of a months-old thread would only be seen by those who had originally responded to it.)

There are indeed hundreds of music player apps, some with an EQ function. But the sensitivity of my headphones is such that I have to have the volume near-full, which gives zero headroom for a 12dB boost at 3kHz, which I now enjoy. Also, having (largely) tamed iTunes and the standard Apple music player, the others I tried didn’t seem capable of managing my music and podcasts how I like.

Before starting this project I tried both a telecoil neckloop and direct input shoes. Both gave a bass roll-off starting at around 500Hz, dropping to -15dB at 250Hz and -40dB at 125Hz. I’m not a thumpy bass person but that was just terrible. I couldn’t definitely say whether it was the HAs (Oticon Spirit Synergy) rolling off (my audiologist said not) or the vented domes that just don’t couple the lower frequencies. (I tried larger domes, which were no better and less comfortable, and also the triple-flange earbuds from my Etymotic ear canal earphones, which are fine with the earphones they belong to.)