This is from GN AAA presentation: 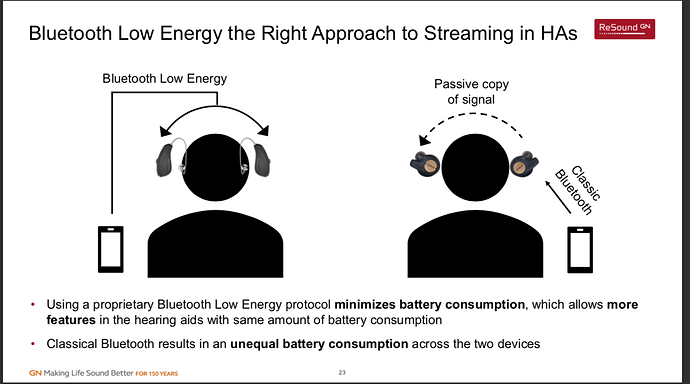 Not only that, but there is additional latency in the secondary HA.

I’m disappointed in the Bluetooth SIG for not coming up with a standardized BLE profile as has been done for other devices. There is no reason for BLE communication to be proprietary.

It’s not as dramatic of a difference in power consumption as you may think. My “master” HA on my Marvels is my right, but my left HA dies by half day sooner than the right every time because I need a bit more gain on my left (both are ultra power receivers). (wearing 13-T model, so using 13 HA batteries and not rechargeable version of Marvels) So, while it may be true for some people (that the master HA dies earlier), the benefit of having BT connectivity outside of the Apple ecosystem is a pretty strong advantage for giving up what may not be that significant of a drop in battery, thanks to Phonak’s hard worked for engineering. In regards to latency, I think the delay may be so small that it is unnoticeable to most if not all HA wearers. I’ve never even thought of it. I just deliberately looked for it and could not hear any drop in latency.

I do agree, however, that BLE communication being proprietary is unfortunate. It’s what we have for now, though. And Phonak’s solution is nothing to be scoffed at, especially if you understand it is intended and designed to be used with one device at a time. I’m thoroughly impressed with it and have no regrets with returning my ReSound Quattro HA’s, that I trialed for 6 weeks, in favor of the Phonak Marvels.

I have the rechargeable Marvel M90 aids. I’ve been wearing them since mid December. My right ear needs more amplification than my left so I had my Audiologist set up the Left aid as the Master. I stream music often or use the TV Connector with my laptop (never noticed any latency) and I’ve never had any problem with remaining battery life at the end of the day. I usually wear them around 15 hours each day and when I put them into the charger at night they still have around 40% battery left. Yes the left is slight lower than the right but not enough to be significant.

Great to hear your experience as well.

I think that the other HA manufacturers are going to blow this battery thing and whatever else they can find to try to knock Phonak in whatever way they can. They have reason to be concerned with the technology Phonak has come up with: it’s very good, and it’s been a game changer for a lot of people.

It’s not a matter of “knocking” Phonak. Bluetooth classic was not originally designed for hearing aids. Both of the profiles used by Phonak (A2DP and HFP), as well as HSP, were designed a long time ago, based on the assumption that the connection was to a single device, not to a pair of devices. In order to get around this limitation, one device must transmit to the other, resulting in uneven power draw and latency in the secondary device.

Bluetooth LE was designed to provide ways around these limitations. The long term direction will be BLE. Apple already has it and Android will have it in the next release. It’s part of the continuing evolution of the technology.

As for whether what Phonak did is a gamechanger, that’s debatable. Sure, they eliminated an intermediate device, but not without limitations that may be show-stoppers, depending on your use case. For me, they were show-stoppers. I would be very surprised if at some point, Phonak supports MFi and “made for android” (or whatever it will be called).

Maxing out my battery on my CI/HA is very important to me because I wear mine like 18 hours a day.

Resound and Cochlear is on the path to doing this, I get an impressive 24-30 hours on streaming with Cochlear’s rechargeable standard battery and Quattro rechargeable. Since the a2dp sink is offloaded to 3rd party devices such as the phone clip and phone, I don’t have to worry about 1 going to die faster than the other one.

Other than trying to use the Marvels outside of their designed use (one device usage), I’m not sure what “show stoppers” are actually present in real-life scenarios with the Marvels. Battery life impact is marginal at worst, no latency that is detectable, and to top it off the quality is better than BLE on almost all reports. I personally came to this conclusion and had chills up and down my spine when I heard a piano being streamed to my Marvels in comparison to streaming on the Quattros, which has arguably the best implementation of BLE to date on MFi HA’s. The only “show stopper” may be that the hands free microphone doesn’t work well in noisy situations (others have a hard time hearing on the other end of the line).

It’s considered a game changer to almost everyone except you, @darylm.

This topic was flogged to death elsewhere and to claim that the limitations of the Phonak bluetooth implementation are only relevant to me is complete BS. If you don’t agree, let’s agree to disagree.

Do we have any figures on what the latency is? Do we have numbers also for the latency from signal to HA for each strategy. It’s a pointless diagram without supporting data. Also, the passive copy does not need to be Bluetooth at all, so the latency could be very minimal. Are they even using 2.4GHz for that or the near field radio?

As for whether BLE is used, I looked at the FCC certification for the Oticon Opn and it only referred to Bluetooth in the 2.4 GHz band. Since the HA has to have a bluetooth chip, IMO, it would be very strange if it did not use BLE to transmit from the primary to the secondary. You could find this out by looking at the documentation for the Marvels. They will have an FCC id. You can look that up and read the reports. There is another thread about this topic.

Latency is a non-issue, @grantb5. It’s been a complaint of approximately 0 people on this board. It’s only theoretical at this point.

I think there will be a BLE audio standard but it doesn’t really matter. Classic can do the job and if BLE gains an audio standard, some brands may use BLE and some may build on Phonak’ s Classic foundation.

I have no idea why Phonak did not include the code and storage for multiple paired devices. Space must really be tight. To be really functional will require multiple radios, and that takes a bigger chip, or a denser, more expensive chip (I don’t know if that exists).

To be fair latency is a big deal in Computer Science.

Most bluetooth stack has a delay to synchronize the audio/video playback.
At the same time the Marvel, may be transmitting something to sync the audio for both hearing aids.

As a former web dev and programmer, I don’t disagree that latency is a big deal. What I’m trying to say is that literally no one on this board has mentioned any delay with the Marvels. I read lips, and when I am watching a show on my iPhone XS, things are perfectly in sync. I feel that people are searching for a problem here with Marvels’ latency that doesn’t really exist on a practical level.

I have no idea why Phonak did not include the code and storage for multiple paired devices. Space must really be tight. To be really functional will require multiple radios, and that takes a bigger chip, or a denser, more expensive chip (I don’t know if that exists).

Power requirement to power to handle N pairing at the same time is large enough. It also has to connect and send an ack signal to keep the signal alive and marvel just look for 1 device to connect due to this.

There is already one BLE “standard” and it’s called MFi. (Apple developed this along with the proprietary interface for their earbuds.) Another “standard” for android is on the way. The Bluetooth SIG dropped the ball by not already making a BLE profile for HA and similar devices.

It’s not theoretical, it’s real. No one talks about it because it’s not enough to be noticeable.

Multiple pairing will require more power to search for connection so they simplified it to connect to one pairing to achieve more battery out of the marvel line.

I think Phonak engineers wanted simplify the complexity to O(1) instead of O(n) time.