Somehow, after putting new flexible tubes on my Phonak Bolero B90 SP’s, I get distortion on most keys of the piano, so I am looking further into programming the aids for live music.

I am trying to recreate what Marshall Chasin (Hearing aids for Musicians) calls a single channel amplifier for Music:
“One Channel is Best for Music In sharp contrast to hearing speech (especially in noise), one channel— or, equivalently, many channels with the same compression ratios and kneepoints—appears to be the appropriate choice for hearing music.”
I already made sure that all channels had the same compression ratio. However, it still a bit obscure, how I would have to go about getting the same kneepoints. On approach seems to be to give all the bands the same amplification. I am still a bit fuzzy whether this should be the Real Ear GAIN/Insertion gain/cc.
However, before I got to experimenting I found that I was limited by the amount that I could decrease the 340Hz gain: 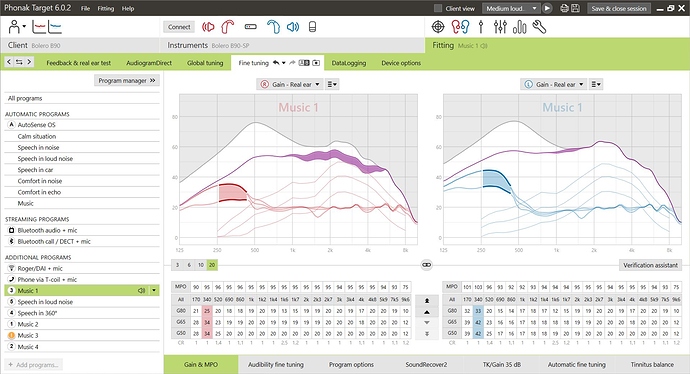 Can’t seem to do anything to decrease it further. Did anyone stumble on this hurdle before and could (s)he remove it? Why only the 340Hz band? Odd.

Just a friendly suggestion: maybe edit your topic title and somehow add the word “music” so that more musicians may notice.

Though not specifically the same as your question, but related, I use “Audiogram Direct” when programming my aids. If I want to increase, or decrease gain at certain frequencies, I play with the level indicated on the audiogram created by “Audiogram Direct”. If I want less gain at a specific frequency, I indicate that I heard that tone at a lower level. This might help you decrease gain at the desired frequency. The big drawback to this approcah is that “Audiogram Direct” only uses a few select frequencies. You don’t have the ability to select exact frequencies. I have noticed that the number of “channels” is adjustable, but if I select the maximum number for my aids, when I adjust the gain at one frequency, it also affects the gain at the adjacent frequencies. So, it doesn’t really have as many frequency adjustment points as we are lead to believe. I have noticed that if I adjust the gain in one ear, it also changes it in the other.

have noticed that if I adjust the gain in one ear, it also changes it in the other.

In the middle of the screen, below the diagrams and above the tables you have two connected rings. If you click on them, they are separated and you can fiddle with left and right independently.

Thanks for that. I knew I had previously been able to adjust each side independently. Since the loss in both ears is pretty much the same, it didn’t actually cause any trouble.

@Markismus
It depends HIGHLY on what you have entered in “Acustic parameters” on the “Instruments” tab.
For your music program you should prefere “Insertion gain”. Otherwise Target guesses what is reaching your ear (combination of direct source, gain and reflection within your ear and molds, depending on the frequency).

@Dani I have entered custom mold with vent of 0.9-1.1 and a tube length of 2. Why do you think that a decrease in amplification at 340 Hz is limited by these acoustics?

@Markismus
It’s because frequencies depends on each other. If you do not enter any gain to 170Hz you can decrease 340Hz (exactly 1 octave higher) down to 0, too. You are using Slimtubes, this is not the best way to get low frequencies through. But with standard tubes you will have similar issues, just because the small receiver can’t produce low frequencies independently.
In your case (with your goal) I would decrease 170Hz to an insertion gain of 14dB and keep the rest at 20dB as possible.
Btw. the displayed compression ratio “1” means: there is no change in compression ratio depending on overall input volume, which is what you want for your music program. But there still is compression being applied: When input is at 80dB the gain will not be 20dB, because that would go beyond your MPO (which you should not increase at all!).

Have you ever heard “Bolero” with your Boleros

? The start is very silent, volume increases over time and ends very loud. I don’t think you will be happy with your goal to add 20dB over all frequencies and input volume. Your loss is too bad, you won’t hear much from the silent beginning and the ending is probably too loud or distorted (because your HA has no room for high volumes in combo with the given gain).

But I am not an expert in how to set HAs for music. There are some other guys who have much more experience than me.

@Dani For streaming purposes the automatic music program is actually quite nice. Even the piano at more than 3 meters is nice. However, the problem starts when I am behind the piano at 40cm: The distortion is rather pronounced.

Easiest solutions is to decrease the volume of the HA’s and to use power domes. However, I am looking for a better solution. For now, I can’t say that the experiment with the single channel approach is a succes: The piano immediately sounds like a electric piano. However, the distortion is almost reduced to nothing. So it could be that Chasin is onto something here.

If it is indeed the compression due to the MPO limit that causes the distortion another approach is to level the MPO’s to the lowest dB among them: Hopefully that would generate the same kneepoints in compression. If that doesn’t work I could try to increase the CR for the higher dB bands.

Most frustrating all of this: I have been playing the piano distortion free for months now. Obviously, the new slim tubes are different from the older ones. Just wish I would find how to compensate that.

Thanks @Dani Your response got me in the right direction. Apparently, it weren’t the new Slimtubes that generated the distortion: It is the new acoustics handling for Bolero B90’s in Phonak Target 6.x
A new category has appeared called ear molds and at the same time I got the distortion back that I had eliminated so beautifully in the past half year. Switching from SlimTip to EarMold in the instrument acoustics section of Target got rid of the distortion.

I am so relieved! (And just in time, I see, got to get my kids out of school in a moment!

Congratulations! Otherwise I were not able to help you further as my hearing loss is even worse than yours (that’s why I use Phonak’s Naida).