Anyone think Coronavirus will bring down hearing aid prices?

If virus keeps spreading and stocks keeps dropping there is going to be a lot less money in the world. So one has to wonder if “big ticket” purchases like Digital Hearing Aids will see a slow down in sales and possible price cuts? If the consumer (yes consumers have hearing losses) starts to feel their job is in jeopardy or they might see a salary reduction my assumption is they will hold off buying HA’s. And if that happens you might see a slow down in orders, or more order cancellations. Hopefully this is all temporary but that HA you might be looking at might just get reduced by 20%, 30% due to lack of sales.

If they sell less they will have to charge more.

If you look at the spread in China, most of it happened over the course of a month, and it has now mostly plateaued. So China is a good example of what the epidemic looks like from beginning to end.
https://gisanddata.maps.arcgis.com/apps/opsdashboard/index.html#/bda7594740fd40299423467b48e9ecf6

It is likely to do something similar everywhere it takes hold, which is in the colder and drier climates. It has only really started to rise substantially in the West, and it will slow in a few weeks too. Also, we are moving out of the flu season and into warmer and more humid weather.

This is temporary, and I think we will all bounce back by the end of spring.

Well I love in Ohio and the panic seems to be beginning. Grocery stores are flooded. Hearing the same thing in Chicago where my daughter lives. If that’s how it’s going to be no one will give a damn about hearing aids

There may be a lot of very lightly used ones on Ebay.

Economists think that (in general) if they charge more they will sell less.

In microeconomics, supply and demand is an economic model of price determination in a market. It postulates that, holding all else equal, in a competitive market, the unit price for a particular good, or other traded item such as labor or liquid financial assets, will vary until it settles at a point where the quantity demanded (at the current price) will equal the quantity supplied (at the current price), resulting in an economic equilibrium for price and quantity transacted. Although it is nor...

You’re assuming the entire population is exposed in order to make that math work and that is simply nowhere near the case in a country like China.

We really have no idea how this is going to play out. There is no indication that it will be “seasonal.” It could die out completely or become endemic. We just don’t know at this time.

Not to mention China’s social distancing was intense, you won’t be able to pull off the same here in the US. Cost of freedom I guess.

The other big advantage China had was that they were able to build new facilities very quickly. Can’t really happen here in the states, and most hospitals are already operating at 100% capacity.

Coronavirus has hit the stock markets, but I doubt it’ll affect real estate or other items, unless people are unable to pay their mortgages.

Reinfection hasn’t been disproven yet and given the majority of folks in the US have no savings and the median 2018 household income (yes, household, according to Social Security Admin) was only $63K…Two weeks of quarantine and then if you have multiple household members you have to keep quarantining until everyone has been through it…I guarantee it’ll have an impact on bill paying ability.

FWIW, I spoke with an audiologist at Costco. Their supply chains have been disrupted for the KS9’s, and there a delays of days or weeks due to parts made in China. That certainly wouldn’t help costs (in our favour, anyway).

This is kind of like if a tree falls in the woods and there’s no one around to hear it, does it make a sound?

i live in montreal quebec and here we have 18 cases. but our schools are closing for 2 weeks starting from monday and all libraries arenas cityhall, all everything except transport and groceries are closing. its insane. me and husband are health care workers. we know we will get it. not a chance in hell to not get it.

No effect. HA are not sold much in 3rd world countries. Those that can afford HA won’t be affected. Might be temp. slowdown until politicians stop over-reacting. My guess 2 weeks ago was total 250 dead in U.S. Total to date 49. My guess was made before they dumped 2500 off the boat in my hometown of Okld. That could add 5-10 to the total.
Sorry for going off topic.

slow down in sales and possible price cuts?

Does anybody remember 9/11? Everybody was in shock. Purchasing nearly stopped. I was very aware of this because I bought a car the month before. If I had waited 2 months I would have paid $2,000 less— car dealers were desperate for sales.

This is of course a different event and impact. And the HA industry is very distant from raw market forces. If the drop of HAs from Asia matches the drop of buyers coming in for new aids, then it is just a bad quarter, and minor-bad compared to many other industries. (OTOH, the toilet paper industry has pre-sold the next 6 months of sales…)

This post was flagged by the community and is temporarily hidden.

Now it appears with the information coming out, is that the ‘test kits’ from China are showing false positives. People have tested ‘positive’ when they might not be.
Several hospitals have started their own tests, one in Nebraska and one in Cleveland. The United States needs to learn from this and previous epidemics, it is time we produce vaccines and test kits in our own country. We should not depend on China (where the virus originated) for all our vaccines/test kits.
One of the people from a cruise ship, has been in quarantine for 39 days, and his test is still showing positive. He stated on a scale of 1-10 (comparing his experience with flu and bronchitis illnesses), this rated a 2 on the scale. He stated it was like a bad cold, and there appears to be a flaw in the testing showing a positive (possibly related to the body shedding dead cells) and he is no longer contagious. I hope they find more accurate testing, and we rely on solutions provided by our own medical experts in the USA.

I’m afraid that’s an urban legend that test kits, etc., come from China and they’re defective. Everywhere in the U.S. PCR primers can be synthesized de novo on demand. It’s been a while since I’ve been a molecular geneticist but things like reverse transcriptase, etc., also used to be made right here in the good ol’ USA. So just like the Prez has intimated the lack of testing preparation in the U.S. is all Obama’s fault (and Ted Cruz’s father helped assassinate JFK), I’m afraid the claim that the numbers are unnecessarily inflated is wrong - last I heard the numbers in the U.S. were underreported because the CDC screwed up big time in hundreds of kits distributed to states around the nation - and they didn’t blame China for it, AFAIK. The screw-up delayed testing results that could be trusted. (Up until a few days ago, San Antonio only had 75 kits from the CDC when the mayor stated a city our size should have at least 500 on hand for heads-up monitoring.) And Fauci, head of the NIAID at NIH, has admitted that here in the U.S., we didn’t adequately prepare in the time granted us for the testing needed. Here’s a Statista web page for testing in Korea, which gives you some idea of the truly gross population lethality of coronavirus as the South Koreans have run 240,000 tests (multiple tests are needed per person). The death rate is 0.8% of those infected. 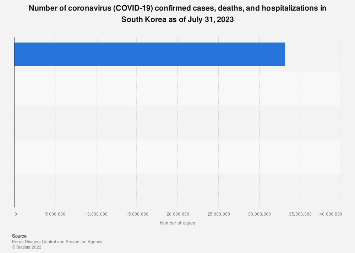 As of the 13th of March 2020, South Korea confirmed the 7,979th case of infection after the first case of coronavirus in the country on January 20.

The link that Dani furnished has a most interesting page on testing - hey, the gun for the start of the race started in January with China’s announcements and everyone had a chance to burst off the starting blocks. Where does the U.S. stand amongst world testing, down near Turkey and Vietnam. Beyond the link for that, I have a quote from a NY Times article that I cited in my previous post.

A recent paper, cited by Dr. Fauci at a news briefing on Tuesday, concludes that the rapid and aggressive quarantine and social distancing measures applied by China in cities outside of the outbreak’s epicenter achieved success. “Most countries only attempt social distancing and hygiene interventions when widespread transmission is apparent. This gives the virus many weeks to spread,” the paper said, with the average number of people each new patient infects higher than if the measures were in place much earlier, even before the virus is detected in the community.

“By the time you have a death in the community, you have a lot of cases already,” said Dr. Mecher. “It’s giving you insight into where the epidemic was, not where it is, when you have something fast moving.” He added: “Think starlight. That light isn’t from now, it’s from however long it took to get here.”

He said a single targeted step — a school closing, or a limit on mass gatherings — cannot stop an outbreak on its own. But as with Swiss cheese, layering them together can be effective.

This conclusion is backed up by history.

Read the rest of the article for a comparison of the coronavirus lethality relative to the strain of H1N1 that caused the 1919 world flu pandemic.

And the delay in ramping up testing in the U.S. was because, in part, the CDC insisted on developing its own in-house test and did not adopt the test designed in Europe. In the following reports on testing, there is no mention of China as a source of bad stuff. Americans, unfortunately, only have themselves to blame

How can I get tested for coronavirus? What you should know about test kits

According to the Association of Public Health Laboratories, there are 69 local and state public health labs that cover 46 states, including D.C.

Coronavirus Test Kits Spread Through U.S. — And With Them, An Uptick In Cases

Test kits for the new coronavirus are now being put to use in labs across the United States. Meanwhile, health officials in Washington state have announced that six people have now died of COVID-19.